This Is What the GOP Assault on Democracy Looks Like by Ben Wikler, Chair, Democratic Party of Wisconsin

Think about a horror movie that takes place in three rooms.

The first room: the chambers of the United States Supreme Court. The Court—including three justices appointed by Donald Trump, following Mitch McConnell’s changing of filibuster rules—heard oral arguments in a case that gives the conservative majority a chance to overturn Roe v. Wade.

As Justice Sotomayor asked, “When does the life of a woman and putting her at risk enter the calculus?”

The second room: the hearing of the Wisconsin Assembly Committee on Campaigns and Elections. Michael Gableman, running the obscenely partisan taxpayer-funded “probe,” grew enraged when Rep. Mark Spreitzer points out that Gableman hired an “investigator” who sued to overturn the 2020 elections. “Shame on you!” shouted Gableman.

“Shame on you” Spreitzer replied. “Why have you hired Mr. Heuer who tried to overturn the will of the people of Wisconsin?”.

Gableman went on to threaten jail time for mayors who don’t cooperate with his sham investigation.

And now a third room: in the Capitol, joined by women leaders including health care workers from throughout Wisconsin, Governor Evers vetoed five Republican bills that would roll back reproductive health care rights in our state. 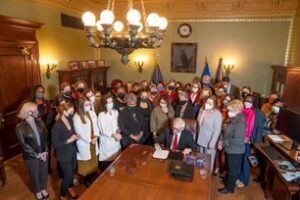 The Governor was unequivocal: “I’ve said it before, and I’ll say it again today: as long as I’m governor, I will veto any legislation that turns back the clock on reproductive rights in this state — and that’s a promise.”

Rebecca Kleefisch has vowed, if elected Governor, to sign those bills, has cheered on the most extreme restrictions on reproductive rights in the country, and has ramped up her attack on our democracy. Republicans are working to tear our democracy apart in order to impose a radical and extreme agenda—nationally and here in Wisconsin. Governor Evers stands in their way.

Let’s stand with him, and with all of the women and people of all genders working to ensure that freedom—including two of the fundamental freedoms, freedom over own bodies and freedom of self-government—survives and thrives in the state we love.

They want to lock the doors on us. But all of us are needed in the rooms where decisions are made. That’s what democracy is all about.

Democrats in 2020 won the Wisconsin Presidential vote, and every statewide office on the ballot: Governor & Lieutenant Governor, Attorney General, and Treasurer. We plan on turning out everyone possible in 2022; right-wing GOP extremists cannot win elections when mainstream voters are actively voting.

The La Crosse County Democratic Party stands ready to make sure that everyone who wants to register or vote in 2022 can do so, no matter what the obstacles.