Ron Johnson and Mitch McConnell Vote “No” on Voting Rights: The Fight Continues

Last week, the Freedom to Vote Act—a tremendous and urgently-needed bill—went up for a vote in the US Senate. Every Democrat supported it. But Republicans, including Ron Johnson, filibustered it. Until and unless filibuster rules are changed, the bill’s progress has halted. Meanwhile, even though Wisconsin’s Legislative Reference Bureau completed its report and found, once again, that 2020’s election was “safe and secure,” the GOP’s sham investigations—which in fact are naked attempts to justify voting restrictions—continue.

Johnson also voted against removing barriers to vote by making election day a federal holiday, automatically registering voters at the DMV, allowing for online voter registration, guaranteeing same day voter registration, and mandating a minimum of a 15 day early voting period. The Freedom to Vote Act would enshrine Wisconsinites’ right to vote, better equip poll workers, prohibit states from banning voters from receiving food or drinks while waiting to cast their ballot, as well as help prevent harassment or intimidation at the polls.

Ron Johnson’s “no” vote was designed to prevent vitally-needed election reforms that would have protected Wisconsinites’ voting rights, and would have prevented dark money interests from dumping unlimited and unaccountable donations into elections.

By protecting the dark money influence in our elections, Ron Johnson is once again serving only himself and special-interest allies at the expense of regular Wisconsinites. No amount of dark money will be able to hide that Johnson has completely failed his duties as a United States Senator. So what now? We go local.

Voter protection—the process of working with individual voters and election administrators to ensure that everyone has the full opportunity to exercise their freedom to vote—used to be a “final stretch of the election” type priority. Today, it’s a year-round fight. We’ve got volunteers phone banking to recruit poll workers. We’ve got staff and volunteers overseeing our year-round voter protection hotline (608-DEM-3232.) We’ve got a whole team on our staff focused on ensuring that voters have the help they need to overcome roadblocks put in their path by Republicans.

And the Democratic Party of Wisconsin isn’t alone—an array of independent organizations are fighting day in and day out to protect the rights of voters and the future of our democracy.

We can and will continue to advocate for legislation like the Freedom to Vote Act. And we can and will duke it out for voting rights in the courts. But through it all, we’re going to organize, organize, and organize—and then organize some more.

This is why the work that all of us do is so essential. And it’s a great reason to be proud to be a Democrat. 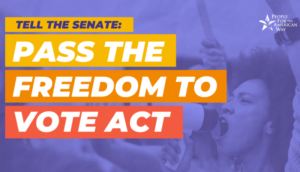