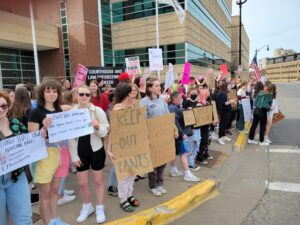 Many pundits like to say that the 18-to-24 age group is politically apathetic. If any of them made it to the LCDP rally on Thursday, they will be busy rewriting that opinion.

A large  throng of people, many of whom were women under the age of 25, lined Fourth Street on Thursday afternoon in a rally called by La Crosse County Democratic Party Chair William Garcia. “We will not let the government tell us what to do with our bodies” Garcia declared. Many Wisconsin Democratic Party candidates for office came to the rally to deliver that message.

“Hell, no, Roe won’t go” chanted a large, highly passionate crowd lining Fourth Street on Thursday afternoon. They were led in this chant by Democratic US House candidate and military veteran Deb McGrath, who told the crowd that she remembers well the pro-Roe era when a woman’s decision on carrying to term was subject to being criminalized or yanked away by state governments.

* Democratic State Representative and US House Candidate Brad Pfaff told the crowd “We have to codify Roe v. Wade into federal statute”, and that this important step needs to be backed up by action from our state legislature.

* Democratic US House Candidate Mark Neumann, a long-term advocate for healthcare access for all, made clear his opposition to women patients having their healthcare decisions subject to legal penalty.

* Democratic US House Candidate and businesswoman Rebecca Cooke, at home due to short-term COVID-related issues, made sure to send an aide to tell the crowd that Rebecca was with them in spirit today, and would be doing all in her power to protect women’s rights.

* And Democratic Lieutenant Governor and US Senate Candidate Mandela Barnes made it clear that he wants to oust US Republican Senator Ron Johnson: “While Ron Johnson may be on the wrong side of this issue, I can guarantee you that I will always stand up for reproductive freedom.”

* I’m tired of pro-life hypocrisy. Does a life only matter when it’s a fetus in a woman’s uterus, or does it matter when the child is Black or impoverished or an immigrant? Why don’t their lives matter? I’d like to see pro-life extend to a person’s entire life.”